Station 1 is located next to the Chief’s House at 480 Equestrian Center Loop Road, Manhattan, Montana. This facility was built in around 2004 to provide a residence and office for the fire chief, a storage and training facility, and to accommodate one department vehicle. It is located on property owned by the Gallatin River Ranch Equestrian Center. The use of this space by GRRRFD was established by a leave and lease agreement with the property owner. This provides the chief and department with a small centrally located station facility on Gallatin River Ranch. Station 1 includes the GRRFD repeater radio and also lightening and seismic monitoring stations. The department keeps Quick Response Unit 11, the medical vehicle, at Station 1.

Station 2 is located at 650 Equestrian Center Loop Road. This facility is owned by the GRR Developer and is used with the Developer’s permission. The Developer has generously donated the use of this facility at no cost to GRRRFD. However, this use is and always has been temporary. It was originally built to house Developer equipment during the construction of Gallatin River Ranch infrastructure. It was not purpose-built to be a fire station. The GRR Homeowner Association and GRR Fire shared this facility for many years. GRRHOA moved to its own facility in late 2018. Station 2 houses GRRFD’s wildland and structure firefighting apparatus.

In 2019 the Board of Trustees decided to build a new station. The GRR Fire Department is the only fire department we know of in the state that does not own or have a lease on a facility that is either purpose-built or adequate for use as a fire station. The Fire District was never in a financial condition to build a station until 2019, when the Board of Trustees deemed the district financial status to be sufficiently robust to consider such a project. A new fire station is needed to replace the functions located in Station 2. The new station will be built to house three to four vehicles in a two-bay double stacked arrangement. It will also include a restroom with shower, a separate dressing/personal protective equipment storage room, and a cleaning and maintenance area within the main bay which will include washing machines to cleanse/decontaminate firefighting clothing. Additional information will be added as the project progresses. 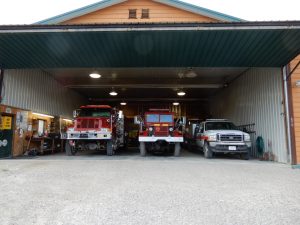