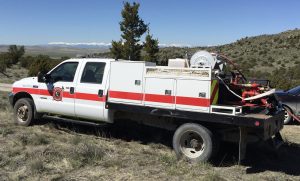 Brush11-1 is a Type 6 wildland firefighting vehicle purchased money from a fundraiser in 2016. It is a 2004 Ford F450 crew cab-based vehicle that had 68,129 miles when purchased. It has a 250-gallon tank and an 83 gallon per minute pump. It is primarily used for wildland operations, but is kept ready year-round supplemental use in other fires as needed. 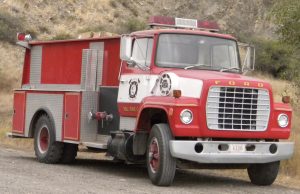 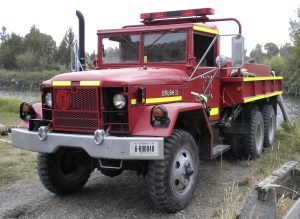 Brush 11-2 is a 1989 AM General M35A2 diesel cargo truck that was acquired from the Department of Defense on 4/7/2009 with 1,293 miles on the odometer. The department modified this “6×6” truck with paint, reflectors, lights, sirens, and radios. Marlin Sprow fabricated a 1,100-gallon tank and attached a gasoline pump and hose reel on the back. This vehicle is used for wildland firefighting and is not kept in service during the winter months.

Quick Response Unit (QRU)-11 is a 1994 Chevrolet 3500 diesel ambulance acquired from the Department of Defense on 3/17/2010 with an odometer reading of 32,248 miles. Originally used as an Air Force ambulance, it now serves as our medical QRU. It also carries a variety or rescue tools including the “jaws of life”. It is State-approved for limited patient transport, but only to intercept with a licensed ambulance, not hospital transport. Gallatin River Ranch Fire Department is licensed as a Non-Transporting Basic Life Support with Authorization for Advanced Life Support Service.

The Gallatin River Ranch Homeowner Association water tender is available for use by the Gallatin River Ranch Rural Fire District through a memorandum of understanding. It is a 4000-gallon 1985 Peterbilt truck. It is equipped to load water into other firefighting engines and has a top-mounted water cannon that can be operated from the driver position in the cab. It has a rear-mounted hose reel and can also spray water from the front and rear bumpers. It is not available to travel outside Gallatin River Ranch. 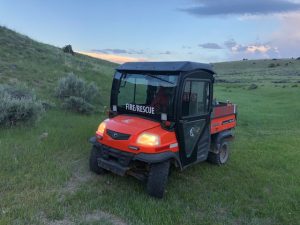 Utility-11 is a 2009 Kubota RTV 900 that was acquired from the Department of Defense in 2016. It has been extensively modified by Ken Weskamp to serve the department need for an off-road vehicle for use in patrolling, inspection, firefighting, rescue, and EMS activities. It carries basic wildland firefighting tools and a small water supply as well as a fire extinguisher.